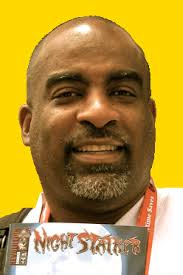 Orlando Harding, pictured on the left, is the creator and writer of R.R.H.. His name might sound familiar as he was the founder and creator of Revolution Comics, and has created two other popular and critically acclaimed series, Pariah and Night Stalker. The talented Andres Esparza provides the pencils while Ulises Curiel does the inking. Filling out the contributors to the series are Ed Dukeshire and Kyle David Ritter lettering with Steve Cobb bringing the dark, moody coloring that fits right into the book.

The story begins with our soon to be heroine Sydney Marie Woodman celebrating her seventeenth birthday. Her life is very normal, giving grief to her younger brother and having her loving mother and father gift her a brand new car for her birthday. It is not until later in the night when strange things begin happening. A mysterious man in the alleyway chants "Blood Moon Hoods Doom," before disappearing, and sadly the family cat is swallowed whole by some creature, and, ahem, recycled back out on the lawn. The two bizarre occurrences are related, forcing her parents to tell her the truth: she is a decedent of Red Riding Hood, a legendary hunter of werewolves. Now Sydney must transform into the warrior she was destined to become for the sake of all humanity, while still attending high school and making sure to fit in her SATs.

We found the comic to be thrilling, leaving us waiting for the next issue! Who doesn't love fairy tales? Especially when they are transformed into modern day takes for a more mature audience? The first issue sets the scene, but you can be sure that Sydney is going to be finding herself in trouble very quickly as her parents arm her to the teeth with some specialty werewolf killing weapons. Right now you can expect a five issue limited series, but the expectation is that it will morph into an ongoing as Harding believes there will be a lot more story to tell.

If you are interested in checking it out yourself, you can check with your local comic shops to see if they are carrying books from First Comics or find them on Facebook at First Comics.