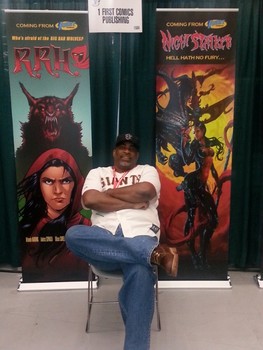 In many ways, it feels like Mister Harding's career has all been building to this. His writing style and sensibilities are well suited to this story as he has a great grasp of grounding an action/horror story with moments of humanity that are often relatable and humorous. He masterfully manages to present a story that is packed with tension that hints a bigger picture that just lurks at the edge of the narratives periphery all while the elements depicting action explode in such a way that readers are left giddy with having found a TRUE genre gem. This coupled with his ability to imagine characters that ignite the imagination make this a story line that promises to keep readers engaged and wondering where they will be transported to next. This monumental feat is not pulled off by mere words alone. It all happens with the talent of the creative team that makes you believe the hot breath and spittle flying frothy and foamy from the werewolves mouth is coming off the page. Artist Andres Esparza's work doesn't overwhelm the reader, instead it allows one to gleefully follow the spectacle clearly with wonder, horror and awe at the weight and detail of the work on display. In his work, hints of Will Eisner's influence can be seen at play as he presents a number of panels where the action spills over the borders, as if the book is alive and struggling to contain the forces at play. Ed Dukeshire's, who has been nominated for a Harvey Award for best letter 2015, contribution brims with a complexity that many may not even be aware of. His lettering is unobtrusive, as it does not call attention to itself. Instead, it allows for a seamless flow that conveys the story in the best manner possible, enabling the reader to immerse themselves in the combined elements that make this whole endeavor work. I can see why his work is being acknowledged with such an honor. Steve Cobb colors are rich, vibrant, consistent and effective. Combined with Mr. Esparza's work, it helps to bring the issues to life. The combined talent of these individuals on the first three issues of R.R.H. makes a statement that will be hard to ignore in an industry always in need of something fresh and new. True fans of horror action should definitely keep an eye out for this series coming to stands near you. If the first 3 issues are any indication of what this team is capable of, Devils Due/1First Comics should brace themselves for the rabid hordes that will be clamoring for this title. Keep your eyes peeled readers, this is one you will want to add to your long boxes.