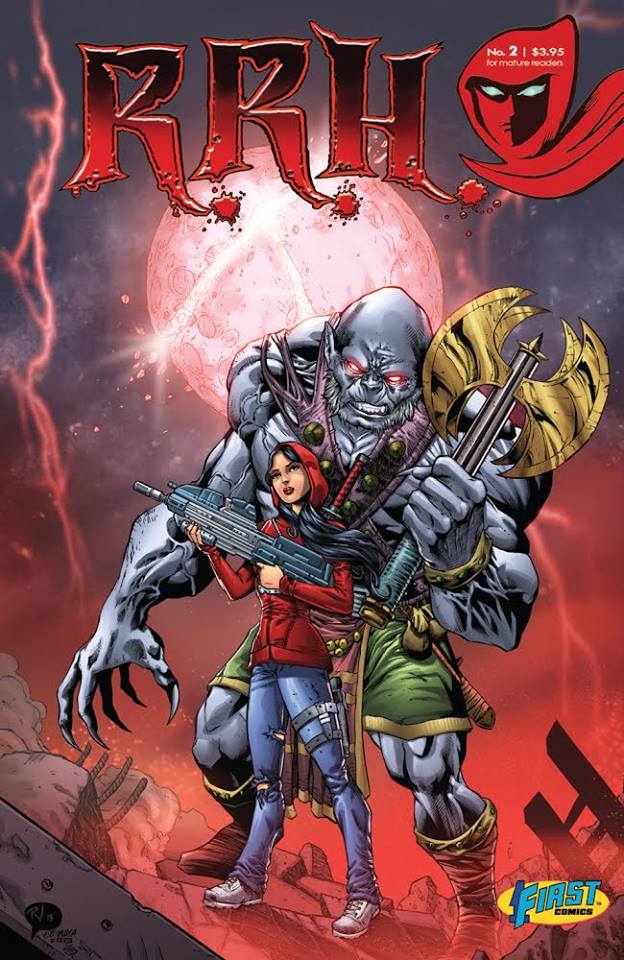 For those of you who missed issue #1 because you were fatally ill (that's about the only reason I can think of why not to read this series), here is what happened: Sydney's 17th birthday came around, and she got a new car. All her friends were mesmerized by its awesome "purpleness." While coming home one night, she noticed some weirdo standing across the street, talking about the Blood Moon and Red's Doom; just another whack-job on the street, right? Wrong. The next morning, the cat is gone, and his collar is in a pile of feces in the front yard. Sydney's parents sat her down and told her that she's part of the Order of the Red Hood (cool people who destroy werewolves), and that now is crucial for them, because it is indeed the season of the Blood Moon, when the werewolves are at their most powerful. She gets garments to wear, a Katana (sword), and a gun with silver bullets. Just when she thought she was a regular old teenager, her world got flipped upside down.

This is a great first issue. Harding is able to catch my attention and keep it. Not many books can do that, and I sometimes just read them to say I've read them. This one, on the other hand, seems like it's going to be really good. First and foremost, I love werewolves. I will not deny my bias, but I will say I hate teenagers, so technically I am no longer biased (it's a good balance, I think, or I'm crazy. Either way, I'm happy with it.). Sydney, though, is actually a pretty cool teenager. She seems like the popular type, whom everyone knows and loves. It's cool to see the popular girl be put in such a weird-yet-freaking-awesome situation. Something tells me that if it were the odd guy out, this just wouldn't be as interesting.

Characterization is done flawlessly by Harding. Sydney's mother seems to live for her kids, and is a typical mom. I could easily put my mother in her place and have it go the same way. Her dad is a big hairy biker-type dude (for the record, I could NOT put my father in his place and have it go the same way). He seems tough but extremely loveable at the same time. Sydney's younger brother Ronnie is a nice little kid, but something tells me that when he wants to be a pain in the ass, by God he can do it. He is also set to be in the Fraternal Brotherhood of the Woodman, which points to another series that may arise after Sydney has had her 15 minutes of fame in this series. Also for the record, I have no idea if he will have his own series. This is just me, wishfully thinking out loud.

And so, here we are, at issue #2. We see a guy, hairy enough to clearly be the werewolf in this issue, get into a bar fight. He loses, and then goes to a diner for a snack. This just so happens to be where Sydney works (coincidence? I think not!). Her shift ends, and she goes outside with the cook, James, to head on home. Her car won't start, and James is gone. Some ogres start jumping on her car, and the customer (Ag, short for Agony) tells her to get in his car. With no other options, she does. He knocks her out, and she comes to, tied to a chair. The two argue a bit, and that's where the issue ends. Damn cliffhangers; we want MORE!

Luckily, this is a #2 & #3 review. In issue #3, Harding opens up on Ag and Sydney, with a perfect continuity from the last issue. She gets fed up and kicks him in the balls, like any woman should do if she is kidnapped and tied up by a crazy wolf-man. But of course, it could make him angry, triggering his inner werewolf. Such is the case here, in which Ag transforms into his animal half. However, an Ogre named Solomon comes through the wall and saves her, saying that he is dedicated to her. Just what every girl wants to hear...from an ogre. She's a little beat up, but she'll live. At home, Sydney's parents tell her that the Reckoning is coming--the end of days! And that she must be prepared.

At the end of this issue, Sydney admits to her mother that she liked it when she was tied up, being beaten, and fighting back. I read it and thought it was a joke--that Sydney had suddenly realized her inner masochist and let it free! Until her mother said she likes it, too. What? So I stopped thinking with my mind in the gutter, and realized that it just gives them a rush. It's less like masochism, and more like adrenaline junkies' lives. Now, it makes more sense to me. With a "Welcome home," Sydney's mother shows us that Sydney is ready to fight off whatever Blood Moon werewolves come her way. Even more importantly, she is ready to defend the Order of the Red Hood.

Harding has created a spinoff of a classic tale, and made it his own, complete with secret orders and ogres. Not only has he created an incredibly addictive story, but an insanely likeable protagonist, whom we as readers definitely have faith in. We want her to succeed, we want the Order of the Red Hood to succeed, and we feel like we are getting to know Sydney on a personal level. When you feel like a protagonist is your BFF, the writer has done something right.

Esparza's artwork, in all three issues, is done with clean line work and just the right amount of detail. I've seen artists illustrate panels with crowded backgrounds just to say they added a lot of detail, only to have the panels become confusing and muddy with so much intricacy. On the other hand, I've seen artists put so little detail, just to say they really wanted to focus on the characters; well, okay, but what's the setting? Esparza's artwork is just right, keeping the perfect amount of detail so we know where the scene is taking place, but we don't get unwanted detail that has absolutely nothing to do with the plot of the story.

Something I just can't deal with is unexpressive artwork. Esparza's illustrations are anything but that, with emotive faces on characters and a general tense tone for the intensity that is the season of the Blood Moon. Sydney isn't quiet about her frustrations, and her parents are understanding about them. Even Ag has his creepy expressions show through his callous exterior quite a bit. With the natural colors, the realism of this book is so eerie that it makes me feel as though the Order of the Red Hood might actually exist.

To say the least, this series is perfect. It has gore, but not so much that it would sicken me. It has suspense, just enough to keep me on the edge of my seat. It has werewolves, a concept in and of itself able to keep my eyes open until they dry out. Harding and Esparza make quite the tag team in taking on this series, and I hope like Hell that they don't stop any time soon.