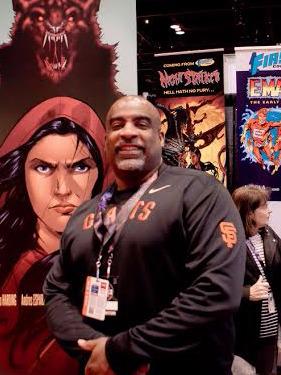 Subjected to what he believed to be some truly horrible comic book stories, comic book collector Orlando Harding felt he could do better. With a challenge and words of encouragement from his wife, the full-time licensed substance abuse counselor immediately launched into his writing career on nights and weekends, churning out his first story, PARIAH, followed by NIGHT STALKERS, which earned him a 2013 GLYPH AWARD for Best Female Character. This week, Harding is about to launch his very first comic book published by First Comics, RRH.

"I made a comment to my wife that I thought I could write a better book than what I was reading," Harding explained. "She challenged me to do so. She said that I always had a good imagination and the next thing you know, I was writing Pariah."

If it sounds like a pretty simple road for the born and raised San Franciscan, think again, as Harding was told No so much that it might not have been a surprise for him to think his name was actually the two-letter word. But, a funny thing happened on the way to landing his first-ever publisher title, Harding just kept plugging away and never gave up.

CLICK HERE TO READ THE FULL INTERVIEW WITH ORLANDO